Dear Brothers and Sisters, Christians of the long-suffering Belarusian land!

We, the undersigned, clergy and laity of the Russian Orthodox Church and other local Churches, Roman Catholics, as well as Christians of other confessions, living in Russia and other countries, address to you our words of solidarity, support and consolation.

To give a legal assessment of the events taking place in society is the business of lawyers, not of the church community. Nevertheless, according to the Fundamentals of the Social Concept of the Russian Orthodox Church, the church community cannot be isolated “from participation in solving socially significant tasks”, and cannot be deprived of “the right to assess the actions of the authorities” (III.3.), primarily of the right to a moral assessment.

Each of us knows from experience that “the world lies in wickedness” (1 John 5:19). Each of us, regardless of our country of residence, encounters injustice, deception and hypocrisy. However, the events taking place in your country over the past few months do not leave us the opportunity to observe them silently and indifferently. Separated by political boundaries, we Orthodox Christians are members of the same Body of Christ, and therefore, according to the word of the Apostle, “if one member suffers, all the members suffer with it” (1 Cor. 12:26).

On August 16, the Synod of the Belarusian Orthodox Church made an appeal, which, in particular, said: “We believe and hope that the country’s leadership, which is rightfully called upon to respect and protect its people, will stop the violence, hear the voices of the injured and innocent victims during the period of confrontation, and will hand those who have shown atrocities and cruelty over to lawful judgment and condemnation.» That did not happen. None of those who displayed “atrocity and cruelty” were condemned; on the contrary, the degree of violence only increases. The documented cases of injuries sustained in police stations and pre-trial detention centres run in the hundreds. The evidence of torture, abuse, and humiliation of the detainees, which is confirmed by photographs and videos, evokes the memory of the atrocities of the German occupation authorities as well as the henchment of NKVD on your land. Here is the testimony of the priest Alexander Kukhta who served in a volunteer camp and met the people who had been detained in the first days of the protests: “I was there and saw with my own eyes the battered people who were beaten during detention, tortured in a police van, tortured in prison. They were tortured with fists, batons and electric shockers. They did not feed them for three days in a row, they kept people outside or forty prisoners in cells measuring 5×6 meters (they slept standing up), and periodically beat them. Just like that. With no reason. Because they can … There was also a guy on whose back they knocked out a cross with batons. What for? Why?” Several people have died since early August, including a 31-year-old Roman Bondarenko, who was beaten to death after being detained.

On the eve of the feast of the Nativity of Christ we recall with particular acuteness and pain the story of the Jewish king who destroyed many young lives, driven by fear of losing power. The sorrowful words of the Old Testament prophets come to life:

“Hear, you heads of Jacob and rulers of the house of Israel! Is it not for you to know justice?—you who hate the good and love the evil, who tear the skin from off my people, and their flesh from off their bones; who eat the flesh of my people, and flay their skin from off them, and break their bones in pieces, and chop them up like meat in a kettle, like flesh in a caldron. Then they will cry to the Lord, but he will not answer them; he will hide his face from them at that time, because they have made their deeds evil”. (Micah 3:1-4)

The ministers of the Church of Christ who raise their voices against lies and violence are under pressure and threats in Belarus. “The state will not look at it with indifference”, “it is necessary that the law enforcement agencies give them an assessment”—these directives of the authorities are being implemented. Roman Catholic Archbishop Tadeusz Kondrusiewicz, who had called on the authorities with an appeal to start a dialogue and stop the violence, was denied entry into the country. For a single appearance with a poster depicting Newton’s portrait and his formula “there is opposition to every action,” as well as for participation in a peaceful demonstration, priest Vladimir Drobyshevsky, a cleric of the Gomel Diocese, was sentenced to a total of 25 days of imprisonment. Priest Alexander Bogdan, a cleric of the Grodno Diocese, was cautioned for laying flowers on September 13 in memory of the deceased museum director Konstantin Shishmakov who had refused to certify the final voting protocol, and was later found dead. After the destruction of the impromptu memorial at the site of the capture of Roman Bondarenko in Minsk on November 15, as well as in other places, the head of the Synodal Information Department of the BOC Archpriest Sergiy Lepin wrote on his Facebook page: “I don’t understand why this mockery of the portraits of the murdered man, of flowers in his memory, why is this satanic trampling of lampadas and icons, fighting an impromptu memorials in the yards, along the roads …? What’s the point? Because they weren’t approved, right? and this kind of behaviour and attitude — is it approved? By whom?“ This questioning alone earned the priest an official warning from the prosecutor’s office, where, in particular, it was said that he deliberately increased the level of tension in society, incited hatred of the authorities, encouraged aggression, and, in addition, his statement contained signs of slander. Catholic Bishop Yuri Kosobutsky received the same warning for criticising the same issue.

We express our solidarity, support and deep respect to bishops, priests and all Christians who, disdaining danger, remind of the freedom and dignity of the human person created in the image and likeness of God. Your service, merciful and righteous, manifests itself in care and sorrow for every beaten, slandered, humiliated, innocent and suffering person. Everyone who has not conspired with his conscience for profit and security is an example of honesty and courage for us.

Unfortunately, nowadays many are convinced that the Church is always on the side of those who have strength, that the Church always adapts to them, serving their interests. Your ministry shows that it is not. The sermon of the Archbishop of Grodno and Volkovysk Artemy, thanks to the recording posted on YouTube, warmed the hearts of tens of thousands of people. Clergy and laity, men and women—all of you are motivated by love, and this is the greatest power on earth.
Thinking about you, one cannot but recall the words addressed by His Holiness Patriarch Tikhon to the Council of People’s Commissars a year after the October Revolution:

“We know that Our denunciations will only arouse anger and indignation in you and that you will only look for reasons in them to accuse us of opposing the authorities, but the higher your «pillar of anger» rises, the surer it will be evidence of the justice of our denunciations. It is not Our business to judge the earthly power, any power allowed from God would attract Our blessing if it truly was “the servant of God” for the good of the subordinates and was terrible “not for good deeds, but for evil” (Rom. 13:34). Now to you, who use power to persecute neighbours, exterminate the innocent, we extend Our word of admonition: celebrate the anniversary of your stay in power by releasing prisoners, ending bloodshed, violence, ruin, and oppression of faith; turn not to destruction, but to the organization of order and legality, give the people the rest they deserve from internecine strife. Otherwise, all righteous blood that you shed will be required of you (Luke 11:51), and you yourself, who took the sword, will perish by the sword (Matt. 26:52)”.

Any manifestation of your free spirit will cause anger and resentment, but there is no other way for Christians. Let the examples of Saints Ambrose of Milan, John Chrysostom, Philip of Moscow and many others strengthen you, who were not afraid to expose the evil and untruth of those in power. “No one after lighting a lamp puts it in a cellar or under a bushel, but on a stand, that those who enter may see the light.” (Luke 11:33).

We offer prayers for the Belarusian land, in the hope that no one else will be humiliated, beaten, tortured or killed because of their beliefs. We pray for those who, following their oath and orders, have the power to use force and weapons against protesters. May everyone who wears uniforms and weapons retain conscience, honor and dignity, responsibility to fellow citizens, to their brothers and sisters.

We believe that peaceful dialogue is the only alternative to violence. On the way to the Feast of the Nativity of Christ, we know that together with all of you living in Minsk, Grodno, Gomel, Brest, Mogilev, Vitebsk, in small towns and villages, very soon we will meet the Divine Christ-Child and hear the words in a winter night:

“Glory to God in the highest, and on earth peace, goodwill to all people!”

To see the signatures or to sign the letter you can go here. 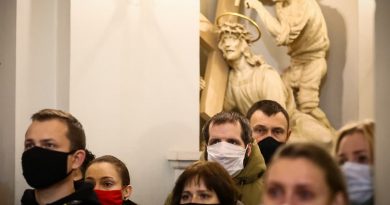 Responding to: Orthodoxy in the Belarus Protests Even before the eruption of the crisis following the August 2020 presidential elections with the mass protests against the long-time President Aleksandr G. Lukashenko,